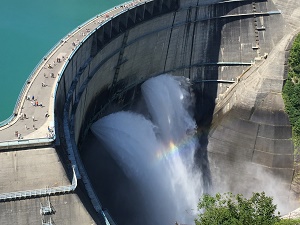 Dams were first built by the Ancient Egyptians around 2700 B.C, Sadd el-Kafara (meaning “Dam of the Pagans” in Arabic), was the first known dam to exist. Dams are built as barriers across rivers and streams to impound the water. The reservoirs or lakes created by dams suppress flood water and provide water for human, animal and industrial uses, as well as aquaculture. One in every three lakes is formed by a dam. One of the most famous dams ever built is in China. The Three Gorges Dam spans across the Yangtze River, and is the world’s largest power station. The oldest dam that is still in use today is the Lake Homs Dam, located in Syria; constructed between the years of 1319 to 1304 B.C.  Listed below are the top 10 largest dams in the world in 2017 based on water storage capacity.

Holding a capacity of 185 billion cubic metres of water, Kariba is the largest dam in the world today. Construction began in 1955 and took four years to complete. The dam was designed and built by Italian Construction Company, Salini Impreglio Group. The surface area of this dam is 5,580km.

Based in Siberia, Russia; Bratsk Dam is currently the second largest Dam. Built by Bratskgesstroy, construction began in 1954 and took ten years to complete. Bratsk has a 169.27 billion cubic metre reservoir and covers an area of 5,540 sq km.

Based on water capacity, Akosombo is the third largest, holding a whopping 144 billion cubic metres of water, has an 8,500km2 surface area and creates Lake Volta. Akosombo was constructed between the years 1961 to 1966. Primarily the dam is used for generating electricity, and provides livelihoods to more than 300.00 people.

Holding 139.8 billion cubic metres of water, Daniel Johnson Dam comes in fourth. This dam, formerly known as Manic-5, is located in Quebec City, Canada. Construction began in 1959 and it creates the Manicouagan Reservoir.

Creating Lake Guri, this dam is the fifth largest. It has a water capacity of 135 billion cubic metres and covers 4,000km2. Guri supplies 70% of Venezuela’s electricity supply.

Constructed from 1960 – 1968, Aswan High Dam impounds the River Nile. It has a water capacity of 132 billion cubic metres, and creates Lake Nasser.

Located in British Columbia, Canada; this dam constructed between the years of 1961 to 1967 comes in at number seven. W.A.C Bennett Dam is situated on Peace River. It holds a storage capacity of 74 billion cubic metres and covers a surface area of 1,773 km2.

Impounding the Yenisey River, Krasnoyarsk Dam is the eighth largest dam in the world today. This dam took sixteen years to complete. The reservoir covers an area of 2,000km2 and holds a capacity of 73.3 billion cubic metres.

Situated just north of the Chinese border, Zeya Dam is built on the Zeya River. The construction on this dam began in 1964 and took 10 years to complete. Holding 68.42 billion cubic metres of water and covering a surface area of 2.419sq.km; the Zeya Dam comes in at the ninth largest in the world.

Impounding the La Grande River in north Quebec, Canada, Robert-Bourassa Dam was constructed from 1974 to 1981, it is the tenth largest dam in the world. The reservoir holds 61.7 billion cubic metres and covers surface area of 2,815sq.kms.