The evolution of water 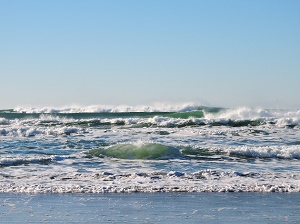 Water has a very long and fascinating history, which began on earth more than 4.6 billion years ago. Scientists believe that the earth was formed dry; it was thanks to iced-filled comets and asteroids colliding with our planet delivering oceans full of water, which has created the beautiful blue marble we know today.

More than 96.5% of earth’s water is contained in our oceans (this does not include what is held in rivers and lakes) and covers 71% of the surface.  Water, vital to all life on earth, is also sourced from other areas, such as hot springs. These spring waters can emerge in coastal areas, such as Hot Water Beach in New Zealand. In this volcanic region, a fissure (a long line of breakage made by the cracking of rock or earth) brings water as hot as 64°c to the surface. The hot water rises up under the sands. During low tide, bathers dig a hole so to enjoy at natural spa.

Fresh water springs, located where groundwater naturally emerges from the earth’s surface, in an amount large enough to produce a pool or flow, this usually streaming downward, along the land. Some of these natural mineral springs, also known as spas, produce water that has many health benefits. Towns that were built around these areas, such as Lymington, are known as spa towns.

Geysers are an amazing natural phenomenon. Old Faithful is probably the most famous one in the world. Located in Yellowstone National Park, Wyoming, USA; it attracts thousands of visitors each year. Old Faithful erupts every 60 to 90 minutes, blasting a few thousand gallons of hot water 200 feet into the air. The temperature of the water is around 95.6°c and the steam generated from it has been known to reach above 151.6°c. Geysers are rare, worldwide there are only about 1000 geysers and most of those are located at Yellowstone Park.

The Dead Sea located in Asia, is one place on earth where there are no fish, birds, or plants. This is because of the high saline environment; it is ten times more salty than normal sea water. The Dead Sea, which is actually a land locked lake, has a salt content that is higher than any other body of water in the world. The salt washes onto the shores of the Dead Sea and collects in peaks. The water here is so buoyant; you can practically sit on its surface! The Dead Sea has attracted visitors for thousands of years; it was one of the world’s first health resorts, still today the salts from this sea being used in beauty products.