Why is it called the Deep Blue Sea 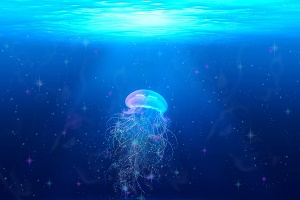 Since our first foray into science, we are taught that water is colourless, tasteless and devoid of smell. If so, then why in art classes are we taught to paint the oceans in the boldest of blues and write stories about the Deep Blue Sea? Let’s take a look at the science behind it.

When observing natural water we are drawn to measure it by clarity and colour, and to the naked eye, this could never be called colourless! Water in its plainest form does contain a pale blue hue, which is only visible in large bodies of water, hence your glass of drinking water appears translucent.

The blue of the oceans isn’t, as many people believe, just the reflection from the sky, it’s due to the absorption and disbursement of colours. Sunlight hits the ocean surface and interacts with the water via the full range of red, yellow and green wavelengths. The absorption level in water molecules is strong in the red end of the spectrum, leaving the blues and violets visible to the human eye.

This of course doesn’t explain how the colours vary from ocean to ocean, and from river to lake, so we must therefore consider the three main outside influences in natural environments:

1) Chlorophyll – is contained within the microscopic algae, Phytoplankton, and is the most light-producing substance in the ocean. Its natural green pigment is reflected during photosynthesis as the phytoplankton absorbs the red and blue portions of the light spectrum. It’s therefore easy to spot an ocean with a high density of phytoplankton as it will appear predominantly green.

2) Non-algal substance – as well as algae, the oceans, lakes and rivers are filled with other substances including:

All of these elements affect the colour and clarity of the water, and although we are steered towards brown being bad, blue being good, this isn’t always true. The brownish colour in some waters isn’t always from pollution or sewage as we in the UK are lead to believe. Rock erosion, soil runoff and limestone build up can all cause colour shifts but “the most common cause for water to change colour is minerals.”

3) Dissolved matter – the dissolved organic compounds found in upland streams, dystrophic lakes and ocean waters include humic acids and tannins. These stem from the many types of aquatic and terrestrial plant life that surround these waters and can turn the water a brown, yellowish hue.

So, although our tap water may run clear, the larger bodies of water can run the gamut of colours from blue, green, brown, yellow and even red. The colour of the water in oceans, lakes and rivers is also used as an indicator for several things, including:

In a later post we shall take a look at some of the more unusual ocean colours and how they were formed, including the rather bizarre explanations that have arisen in regards to multi-coloured seas.