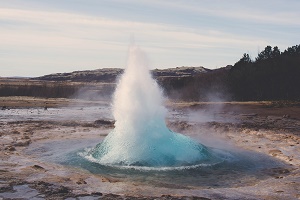 When you’re tired, feeling run down or craving a little luxury, there are few things more wonderful than a dip in a hot tub. Rejuvenating and invigorating, hot tubs can be found in hotels, homes and health clubs around the world.

Though we think of them as a relatively modern invention, humans have been taking advantage of the benefits of bathing in heated water for generations. The Ancient Egyptians may well have used natural hot springs to help keep them healthy as far back as 600BC, and the Romans definitely understood the benefits of heated mineral waters. So just how old are hot tubs? And can natural hot springs really deliver the health benefits they’re credited with?

A brief history of hot tubs

Though historians suspect hot tubs were in use in Egyptian times, it’s not until Ancient Greece that we start seeing more written accounts of the benefits of hot tubs and natural springs. Plato, Homer and Hippocrates were all reported to be fans of hot springs and elaborate structures were built around Greece to provide hot spring fans with places to relax, socialise and enjoy the rejuvenating powers of the water.

By Roman times, natural springs were in popular use. In fact, the Romans invented the word spa which, according to @HotSpringWorld, “Is actually an acronym of ‘Sanus Per Aquam’ meaning ‘health through water.’”

Hot springs can be found all over the world. From the Americas, to Asia, and from Europe, to Africa, naturally heated waters have been known about and utilised for thousands of years. In general, the water produced by a hot spring is heated by geothermal energy. That means it’s warmed up by the heat produced in the Earth’s mantel.

In non-volcanic areas, the water is warmed when it comes into contact with the hot rocks that lie within the crust of the Earth. However, in volcanic areas like Yellowstone National Park, the water is heated when it comes into contact with magma. This molten rock warms the water so quickly and to such a high temperature it can boil over, producing the geysers that the park is famous for.

Because hot water can hold more dissolved solids than cold water, natural hot springs often have an especially high mineral content. This concentration of minerals is thought to have various health benefits, with certain springs said to cure a variety of ills. In some countries, like Germany and Hungary, a visit to the local hot springs can be prescribed by a doctor, showing just how much benefit these naturally occurring hot tubs can have on our health.

Even if you’re not bathing in thermal hot springs, water still has an impressive range of benefits that you can take advantage of. To find out more, take a look around our site.