Who put the fizz in fizzy water 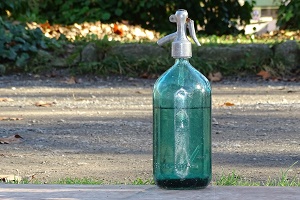 Water in it’s natural state is quite incredible really, but even with its invigorating, energy giving attributes you sometimes just want to change it up a little. As far back as 500BC Hypocrites realised the need for change when he invented the Hippocratic sleeve, a rudimentary water filter. Since then we have added a diverse range of water products including:

Sparkling water became fashionable in the 70’s with what many agree was the most impressive ad campaign in history. It essentially persuaded huge numbers of people to buy fizzy water from a green bowling pin shaped bottle. The brainchild of French company, Perrier, opened the floodgates for what is now one of the most popular drinks bought in restaurants, bars and supermarkets. It remains a mystery though why, “It does not fully account for what remains an even greater mystery: the enduring appeal of sparkling bottled water.”

This fascination with what many believed to be a sophisticated way of drinking water, revived the niche trend of home carbonation with the soda syphon. The soda syphon has in fact been around since the Boer War, when it was used as a method of bringing sparkling water to the outreaches of the British Empire. The original device was produced by Sparklets and was marketed, “As easy for a housemaid in Bayswater as for an orderly in South Africa to use.”

With the advent of bottled water and the destruction of factories in WW2, there was a rapid decline in its popularity and it dropped out of favour until decades later.

The SodaStream company was formed in 1903 and produced a sizeable machine for aerating liquids, which was sold to only the higher echelons of society and the Royal Family. The 1950’s saw the release of the very first home version which was still rather hefty in size and unattainable in price for most households.

However, it was 1973 that changed everything.  As Perrier had begun its monopoly on bottled water, Sodastream gained favour with their ad campaign too.

Introducing a new, easier to operate soda syphon coupled with a TV ad featuring among others Tommy Cooper, with his catchphrase – “Just like that”, Sodastream rocketed onto everyone’s must have list and the rest is history.

With even sleeker machines, faster operating speeds, fizzier bubbles and a whole host of flavourings, Sodastream machines are still as popular as ever for making your water truly sparkle.