A timeline of water treatment 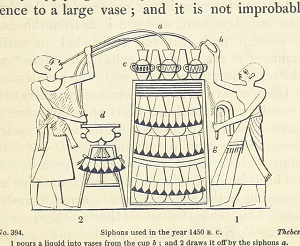 As far back as the Ancient Greeks, it was well known that boiling water would purify it. Although the main purpose for this was to improve the taste, if we look at the timeline of water treatment then we can see how this has changed along the way.

1500 BC – The Ancient Egyptians were the first people to separate clean water from its contaminants, through the use of coagulants. We know this because there were pictures found on the wall of the Tomb of Ramses II.

500 BC – Hippocrates introduced the hippocratic sleeve – which was a piece of fabric through which boiled water was passed through, in order to remove sediments. This is still regarded as the forefather of the present day water filter.

200 BC – Although this has been disputed, the jury is still out on whether or not the Romans did introduce the Aqueducts. These structures, that were used to transport water from one area of plentiful supply, to an area of high population, took 500 years to complete and covered a length of 400 km.  These aqueducts were revolutionary, and are still the basis of our modern day sewer systems.

500-1400 AD – During the Dark Ages, following the collapse of the Roman Empire and the destruction of many aqueducts, the future of water seemed bleak. It was around this time, however that the premise of clean water not necessarily being safe water took hold. Amazingly though, it took another 200 years before any major steps could be taken to not only prove it, but to deal with it.

1627 – Sir Francis Bacon started his experimentation with desalination and even though it didn’t revolutionise, it did set the scene for future experiments.

1700s – Robert Thom constructed the first water treatment plant, which introduced slow-sand filtration and became the flagship for a clean, safe water supply to local Scottish households. This triggered the idea that every person should have access to safe drinking water and the necessary creation of a water pipe system. Although this idea was promptly captured and copied in London, it took several years before it became common practice throughout the rest of the country.

due to the discovery that cholera was being spread through a water pump that was contaminated by infected sewage water.  It was at this time, that chlorine was introduced to the water supply to disinfect it. This also once again reinforced the fact that the taste of water isn’t always an effective evaluation of the purity of it.  This forced the government to install sand water filters and chlorine as compliance in the newly formed government regulation of public water.

1902 – The negative effects of chlorine surfaced in the form of respiratory diseases and water experts began a search for an alternative, which they found in the shape of ferric chloride.

In 1903, water softening was invented as a technique for water desalination. The harsh minerals of calcium and magnesium were removed by sodium, via ion exchange. This method is still used today in the home water softening machines, supplied by Total Soft Water.

1970 – The public health concerns surrounding water took a major shift from diseases caused by micro organisms, to water pollution from pesticides and industrial waste. Regulations were brought in to clamp down on farming and industrial waste resulting in the introduction of water treatment plants.

1980s – The discovery of the membrane that was to be the pivotal element in reverse osmosis can be added to the timeline.

Since the 1990s, we have seen the development and use of water treatments for home rise rapidly. There are many benefits to installing a water filter, or softener in your home or office, but if you are slightly confused which one is right for you, contact one of our experts.