Boil, steam or blanch – which one Is best? 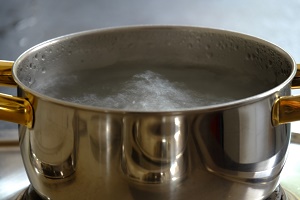 There are several ways of cooking vegetables with water, and each one starts its journey the same way. Bringing water to 212 degrees F, 100 degrees C, or in more recognisable terms, boiling point. So which out of boil, steam, blanch is better for our vegetables? Before we analyse the effects, let’s take a quick look at each method.

There are actually three stages of a boil – rapid, slow and simmer – to get the food timing right, it’s important to know the difference. Rapid boil – when the water surface is bubbling rapidly and tends to spit a lot. Slow boil- the bubbles are still present but are much smaller and less ‘angry’. Simmer- the bubbles are kept just under the surface, but are still present.

Things have certainly changed over the years, and not only can you have instant boiling water from a tap, but how times have changed over the years in terms of how we boil our vegetables. A report from a New Zealand newspaper article from 1902 suggests that “carrots should be boiled for 45 minutes and cabbage and cauliflower for up to an hour”. Of course now we understand that the ‘mushy vegetables’ from years gone by are totally devoid of any nutritional value, as well as taste!

The ‘al dente’ brightly coloured vegetables that accompany our main dishes these days are far more nutritious, even though many of the vitamins and minerals do escape into the water during the boiling process. A good tip for those of you who like your vegetables boiled, is to use the water in which they were cooked in for the gravy or sauce. That way you are replacing those leaked nutrients back into your food via an alternative route.

This is an increasingly popular method of cooking, not only vegetables, but also meat and fish. The scientific explanation is that the food cooks in the steam that is released from boiling water. Which although seems self explanatory, there are several ways of achieving this. For example – steam basket – this can be made of either metal or bamboo and comes as part of a set or fits onto a saucepan containing the boiling water. It’s important to ensure the water level doesn’t rise up over the steamer basket, as then you will be defeating the object altogether as you will be boiling your food. A tight fitting lid covers the basket, trapping the steam and cooking the food by the moisture in the air, which not only speeds up the process but also retains all the goodness in the vegetables.

As a quick guide for cooking see these recommended times –

These ‘steamer sets’ can be used either on the hob or independently in an electric steamer.

Microwave steaming – now contrary to many reports that microwaving can eliminate all goodness from our foods, it has now been heralded as THE way to steam your veggies. It not only cuts down the cooking time but it actually keeps in much more of the freshness.

There are two methods of steaming in the microwave –

Blanching means to ‘plunge a fruit or vegetable into boiling water for a short amount of time before transferring it to an ice bath, which quickly stops the cooking’. It has many uses in food preparation, including –

So does it come down to family teachings, personal preference or space on the kitchen counter as to which method we cook our veggies? The rise in steamer sales show that there has been a huge shift away from boiling our greens till they resemble wallpaper paste.  If asked if it’s a time related or nutritionally guided choice, however, we struggle to find an answer. The only guarantee, is that our taste buds have changed, and slightly crunchy carrots are no longer considered ‘bad taste’.