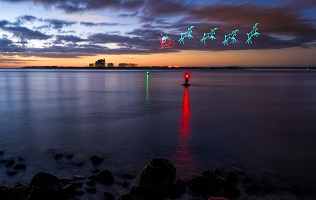 The world we live in today is evolving at a ridiculous pace, but luckily at this time of year the more unusual Christmas traditions are happily carried down from generation to generation:

There’s one rather barmy UK tradition, the Christmas day swim, that has been taking people out of their comfy homes for years, and it doesn’t look to be dying out anytime soon. What’s even more astounding, is that it isn’t restricted to just one swim, there are outdoor Christmas swims organised all over the UK, and some more popular than others.

How did it all begin?

It’s not, as some people like to believe, an antidote to too much Christmas pudding, or a way of making room for more Christmas pudding, it actually dates back to 1860 and England’s oldest swimming club. The Brighton Swimming Club was formed in 1858 by a small group of men, who wanted to improve their swimming. With limited access to public swimming baths, they began their training in the sea. With a schedule of daily sessions at 7am, they felt that missing out on Christmas Day would be detriment to their training and so the tradition began.

Just west of Brighton Pier on Christmas morning you can witness the 30+swimmers, along with around 3,000 spectators. It has become so popular that people turn up in all kinds of ‘festive garb’.

Whilst the benefits of outdoor swimming are numerous, the Christmas Day, and some Boxing Day swims have become something of a charity fundraiser for many organisations. Blending the sport with raising money for worthwhile causes seems to be very fitting at this time of year.

In 1904, when Peter Pan made its London stage debut, J M Barrie  donated the cup to the Swimming club. Since then, following in the true Peter Pan tradition, the Christmas Day cup sees grown-ups embracing their youth by throwing themselves fearlessly into the icy lake.

So just what is it about this increasingly popular tradition? The Royal Dorset Yacht Club says, “Watch the swim from the clubhouse with a glass of fizz or whatever takes your fancy!  A great place to sit and watch the swim whilst enjoying the comfortable, warm surroundings of your clubhouse.”

Take the plunge – you never know, it may make it your best Christmas ever.