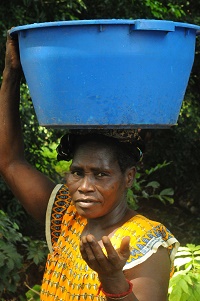 So, just how does rainwater harvesting save an African village?  For decades, the Eastern Kenyan area of Makueni County has suffered from extreme drought. There is plenty of evidence that the lack of water for homes, crops and sanitation causes famine, disease and hardship. Men, women and children have not only been forced to travel miles in search of water, but sometimes that water source is dangerously polluted.

Here in the UK, we must seem spoilt, liking, as we do, a good moan about the amount of rainfall we endure. Unfortunately, it seems to fall endlessly throughout most of the winter months, and some of the Summer too! But, remember, without it to replenish the reservoirs, streams, rivers and oceans we would probably be complaining a whole lot more.

The concept of harvesting rainwater

Although there had always been rainfall in this particular area of Kenya, it seemed no sooner had it fallen, it disappeared again, making it seemingly pointless. A group of women decided to change all of that and set about building a simple stone water catchment system to harvest the precious rainwater. The villagers looked at the local geography and set about using the natural rocky landscape to point the rainwater to a central reservoir made up of sand and gravel filters. The harvested filtered water was then piped into huge cavernous water tanks which hold up to 190,000 litres of water each.

Without this organisations help, this village may still be struggling to link their ideas with a working model outcome. At the time of conception 95% of the Makueni County population were living in rural areas and 90% of those had to endure a 30 minute walk to find a safe water source.

The people in the ASDF pledged to assist the people of Makueni County to habituate to their terrain by building as many rock catchment units as they could. As it stands today, there are now 10 catchment units and 26 storage tanks constructed in the area.

Having instant clean water on tap (literally) would be deemed gratitude enough, but no there is plenty more. Some of the locals are making a living selling water to the residents, and with the resulting profit they invest in farm animals for food and trade exchange.

A dramatic shift in the fortunes

Just this week, the Kenyan Authority has published a report in which it states that –

It’s no mystery that rainwater harvesting has myriad properties towards reducing our water footprint but for some countries the proof is most definitely in the pudding. As the Africa Sand Dam Foundation proudly report “Through simple and locally suited rainwater harvesting initiatives, ASDF are transforming lives.”