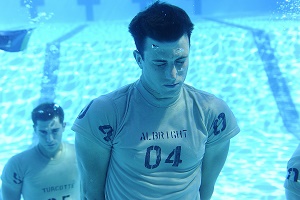 We have seen how a variety of aquatic therapies can be beneficial to body, mind and rehabilitation but exactly what do they entail? Well, there are several forms of exercise based around water and here we will take a look at some of them in a bit more depth.

A water based exercise, Ai Chi combines the movements and principles of Tai Chi, Qi Gong and Watsu. Devised in 1993 by Jun Konno, Ai Chi concentrates on blending the Western and Eastern philosophies of improving mental and physical strength. Each of the exercises are undertaken in shoulder-height water, with a focus on deep breathing patterns that begin each session. Following on the theme of Tai Chi, Ai Chi involves slow, careful movement of the limbs and body culminating in a full body workout. As well as being used to improve balance and composure in elderly patients, Ai Chi is the perfect relaxation technique for the highly stressed.

Just like a famous creosote brand, Aqua Running is exactly what it says in the title, the only difference being that the head and upper body are supported by a flotation device. This has myriad beneficial effects for many people, which include –

For a general fitness exercise, Aqua running can provide results far quicker than dry land running. As water is denser than air, the body has to work harder to move making the calorie burn rate much higher as a result. Incredibly, for the same intensity of workout the heart actually doesn’t have to pump as hard.

So, to sum it up, Aqua Running offers more calorie burn per minute, less stress on joints and heart rate, suitable for extremely overweight people and more interesting than usual surface running.

For those of you that like to add a bit of competitiveness into your exercise, Aqua Running now has an Aqua Jogging World Championships. This burgeoning sport is held each year in Finland and the number of athletes competing is growing year on year.

The Bad Ragaz technique for strengthening the body strapped to a board and submerged in water was developed in 1930 in Bad Ragaz, Switzerland. Although this system was successful, it wasn’t until 1957 when a Dr. Knupfer introduced the idea of using flotation rings that the technique began to yield amazing results. The previous method restricted movement while the flotation rings provided support, but allowed the untethered limbs space to move around. The Bad Ragaz Ring Method is a one-on-one therapy treatment designed for use on patients suffering from rheumatoid arthritis.to parkinson’s disease.

The Burdenko Method was created by Igor Burdenko, a Soviet professor with more than thirty years experience in water rehabilitation, training and conditioning. As well as devising rehabilitation programmes for top flight sportsmen and women, Burdenko worked heavily with disabled clients helping them adjust to life’s new challenges.

The Burdenko Institute shows how the water based exercises improve athletes from all areas of sport, including gymnastics, basketball, baseball, swimming and fencing et al. Performing a set of exercises specifically tailored to the clients needs, the increase in performance in strength, flexibility, coordination, balance and endurance exceeds all expectations.

As we go on and look at more forms of water therapy, noting the many successes derived from them, it remains to be seen how soon it will be before health facilities will provide pools for this much needed water therapy.