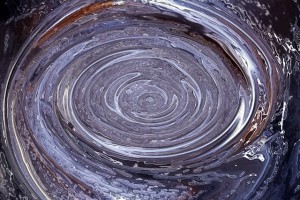 Following on from our last post about the wonder of whirlpools, where we learned about the largest, the strongest, and the most perilous whirlpools, we continue with:

The Moskstraumen is the brother of the Saltstraumen, regarded as the strongest of all whirlpools and the inspiration for much great literature.

This whirlpool, which spans around 130-160 feet across, is so destructive it can cause tidal currents for up to five miles wide. The forming of this monstrous beast derives from strong currents combined with a semi-diurnal tidal cycle and powerful winds. These create a series of eddies amongst the deep and shallow water causing a powerful pull deep into the depths of the ocean.

Although it’s well documented that the Moskstraumen was the inspiration for Jules Verne and Edgar Allan Poe’s famous works, let’s not forget that the first maelstrom mention actually came from Herman Melville through his character Captain Ahab in Moby Dick.

Although Niagara is far more famous for its waterfall, the whirlpool that is created downstream from the falls is a staggering four thousand years old. When the Niagara River is at full flow, the waters crisscross over the rapids generating a reversal effect, culminating in a swirling whirlpool with depths up to 125 feet.

Like most whirlpools, the fascination draws people to it and at Niagara there are three ways to get a bird’s eye view:

Kauai Maelstrom is without doubt the most stunningly beautiful whirlpool on the planet, even being highlighted in the 2011 Nature’s Best Photography Magazine by Patrick Smith, who had a near death experience whilst capturing his acclaimed photo.

Against a backdrop of red and gold, the sight of the sea sucking foamy water into a crevice of jagged rocks is a sight never to be forgotten. Pressure erupting from the lava tubes forces water out into the air blasting the sea spray up to heights of 40 feet before being dragged back into the dark, dangerous vortex. There is no doubt that this beautiful scene is as cruel as it is captivating.

In a Southern area of Italy where the Ligurian Sea meets the Arno River, the incompatible currents combine to form cloaked maelstroms. The locals tell tales of the writhing, foaming water pulling the curious closer and closer and ultimately to their deaths below.

Doctor’s Cove in the province of Nova Scotia, is thickly populated with maritime enthusiasts, who are mindful of the whirlpool that forms in the cove. With the powerful combination of strong tidal waves across a large blowhole, the resulting downdraft creates a forceful vortex that many have failed to conquer. The Nova Scotia history books have chronicled many a victim.

The image we hold of a gentle swirling, relaxing flow of water couldn’t be farther from the truth. Like an iceberg, the real danger of a whirlpool lies way beneath the surface, and the all too fascinating an exterior holds a secret that can be just as deadly.

“When you hear a name like maelstrom, you just know it’s about something wicked. Introduced in English by Edgar Allan Poe from the Nordic languages, from which it came from the Dutch word maelstrom (maalstroom in modern spelling), it literally means crushing current, which is quite a very good description.”