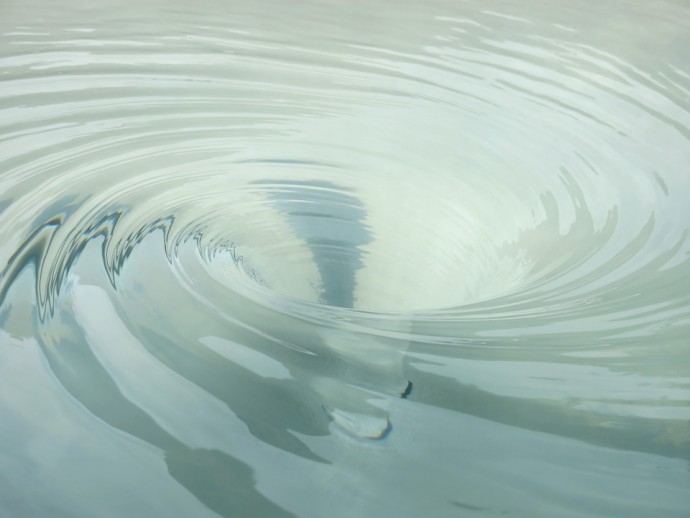 Water provides us with much more than life, energy, sports and great cups of tea. It gives us a glimpse into the power it possesses with waterfalls, underwater lakes and one of its most mysterious manifestations: whirlpools. Before the word Whirlpool became associated with a leading brand of home jacuzzi, these enormous areas of swirling water were the basis for the Edgar Allan Poe classic, A Descent into the Maelström, and Jules Verne’s 20,000 Leagues Under the Sea.

Whirlpools are created by ocean currents moving in a rotating direction, producing a combination of dangerous currents forming into a downward spiral. Although there can be many whirlpools formed from natural catastrophes such as tsunamis, they are just as quickly extinguished as the raging current dies.

Fear and scaremongering has followed the mystery of whirlpools through the centuries and although we now know that larger ships are not in danger of being sucked down to a watery demise, smaller boats are advised to avoid waters with whirlpools that have risen from inclement weather. The permanent whirlpools are a different story altogether and are known as maelstroms. Here are some of the most notorious ones.

The most dangerous: The Maelstrom of Saltstraumen

Positioned close to the Arctic Circle, this Norwegian whirlpool creates the strongest tidal currents on the planet. These currents can reach speeds of 25 MPH, and culminate in whirlpools that are 33 feet across and 16 feet deep. This aquatic phenomenon which has been around for at least two thousand years offers a ‘window of opportunity’ to pass through when the tide turns and the water rushes out.

However, with the ocean currents raging through the straits every six hours, the locals and tourists are advised to use extreme vigilance when down by the sea as the perilous underwater currents are constantly agitated, making the Maelstrom of Saltstraumen the most dangerous whirlpool on earth.

The largest whirlpool in the Western Hemisphere was given the name Old Sow for one of several reasons:

Situated in the Bay of Fundy, between New Brunswick, Canada and Eastport, this whirlpool is also perhaps the most unpredictable of the maelstroms. At any one time, small to medium sized whirlpools (eddies) pop up on every side and unlike their cute appealing name, ‘piglets’, they are anything but! The intense violence of the vortex has been know to reach up to 25 feet in diameter and up to 20 feet in height.

Although the mighty maelstrom can cause havoc with small sailboats, the constant churning causes the bay’s deeper water nutrients and sea creatures to rise to the surface, providing unlimited food for birds and fish.

Scotland’s Corryvreckan, meaning ‘cauldron of the plaid,’ is the world’s third largest maelstrom and with its roar detectable up to 10 miles away, undoubtedly the loudest. According to Scottish myth, the 30 foot waves that swell from a depth of 100 fathoms form a whirlpool when the goddess of winter uses the waters to wash her plaid clothes.

To test this theory, a mannequin was dressed in a life jacket with a depth meter attached and was thrown into the maelstrom. When the mannequin was recovered, the depth meter showed evidence of contact with the depths of the sea at 262 feet.

The drama surrounding the whirlpool doesn’t end there though. In 1947, the author George Orwell came very close to his demise at the hands of the swirling water when he sailed too close to the pool and had to be rescued by a passing lobsterman.

In our next post we shall look at the most famous and most mystical whirlpools, as although these wonders of nature possess an air of menace, they also retain an air of mystery too.