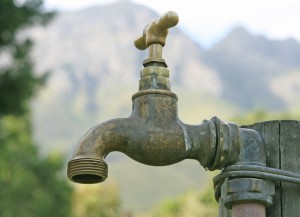 There are many gadgets and inventions that work wonders with our water, including:

How many inventions can help provide water solutions for water stressed areas, though? Luckily, the forward thinkers of the world have come up with some ingenious devices to procure potable water in even the most inaccessible, arid places.

Imagine a device that can literally pluck water from the air! Warka Water is a low tech tower that can be used in areas of Africa where the construction of pipelines and wells is not feasible. Although harvesting water from the air has been around since the age of the Incas, and has been backed by Hollywood heavyweight, Matt Damon, and the world’s richest man, Bill Gates, through the Water Project, there are still many areas that need a miracle!

With the Warka Water, the structure needs no electricity, very little specialised maintenance and it’s so simple to construct that villagers can teach other villagers the construction method. With the potable water being collected from the rain, dew and fog, it can produce up to 100l of drinking water a day. Now that really is miraculous.

Imagine getting up and having to walk miles to collect containers of water before you can start your day. For many women and children, this is their reality, day in, day out. This causes health problems and debilitating fatigue. It’s great news that many regions in the developing world now have clean drinking water straight from a tap, but sometimes that tap too can be far away.

A wonderfully designed (and named) device called the Hippo Water Roller can carry up to 90 litres of water in a container that is durable, sanitary and rolls easily along the ground. The roller was first designed in 1991 by two South African farmers and to date, more than 44,000 Hippo Rollers have been distributed in over 20 African countries.

At Lima’s University of Engineering and Technology, an advert aimed at encouraging students to enrol certainly captured the world’s attention.

In an attempt to highlight the problem with Lima’s running water deficiency, a group of students designed a billboard that utilised the city’s humidity and turned it into potable water. Capturing the moisture from the air and storing it in 20L tanks showed how technology can solve serious life threatening problems. An ad with an ingenious kick to it – brilliant.

In some parts of the world water is plentiful, but dangerously unsanitary and can cause devastation when consumed.

“Would you drink water from your toilet”– screams the pages of the dailies. Although this horrifies us in the western world, for many in developing countries, doing so could be a lifesaver.

“ This very clever device that has the potential to help provide clean drinking water for millions of people who are lacking access to clean water.” It’s also simple to use:

As well as being a lifeline for people in hot and arid climates, this device can also be used as a collection device for rainwater harvesting.

With all these inventions and more to follow, it seems that surely the water crisis affecting millions of people daily will soon be over – won’t it?