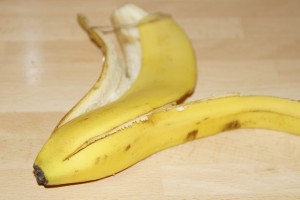 There are a few important reasons for wanting to filter our water:

In our world, we are lucky to have a wide choice of filtration devices. In developing countries that struggle to provide a potable supply of water, filtering local ‘undesirable’ water sources can mean the difference between life and death.

“While water is a big deal for all of us, it’s safe to say it’s an even bigger deal to the 750 million people around the world who don’t have access to safe water. That’s 2 and a half times the US population.”

We have seen many ways of purifying water in the wilderness, and although we can’t imagine ourselves ever being in this situation, it’s good to have some survival skills in our knowledge base! So, here is a little known fact that could not only save someone’s life but could also be a great conversation piece at a party.

Water can be filtered through fruit peel

Fruit can not only provide you with your 5 a day, but amazingly, there are a few fruit peels that can filter water with very little preparation or expensive equipment.

Scientists have discovered that minced banana peels can be reused up to 11 times to purify water that has been contaminated by industrial plants and farms.  A research paper by I&EC research highlights the enormous advantages of this to underdeveloped countries.

The science shows that the compounds in banana peel contain atoms of nitrogen, sulfur and carboxylic acids. These negatively charged acids attract the positively charged metals in the water and bind them to the peel, thus removing them from the water.

In many of the countries so desperate for a clean, drinkable water source, bananas are plentiful. The lack of cost and chemical preparation needed for the peel filtration system means that many of these communities could benefit from safe, potable water made possible because of food waste.

Both of these fruits peel are so effective in water filtration that they can draw out chemicals, dyes, pesticide, phosphate and arsenite from the water. To demonstrate this, try this simple experiment at home:

Now that’s what you call recycling!

Although it was Ramakrishna Mallampati who originally discovered the science behind fruit peel water filtering, there have been a few groups that have been working on the same premise. In Thailand in 1972, scientists worked on a system for cleaning polluted waters in Southeast Asia.

They took the fibers from shredded coconut husk in the first container and then burned rice husks placed underneath in the second container. The contaminated water is filtered first through the coconut husk, removing all suspended material and then through the rice which removes other contaminants, odour and colour. In some countries in Southeast Asia, this method is still in use today.

So whether you use a Kinetico K5 or a bunch of bananas, filtering your water make a lot of sense!