The world’s most peculiar watersports 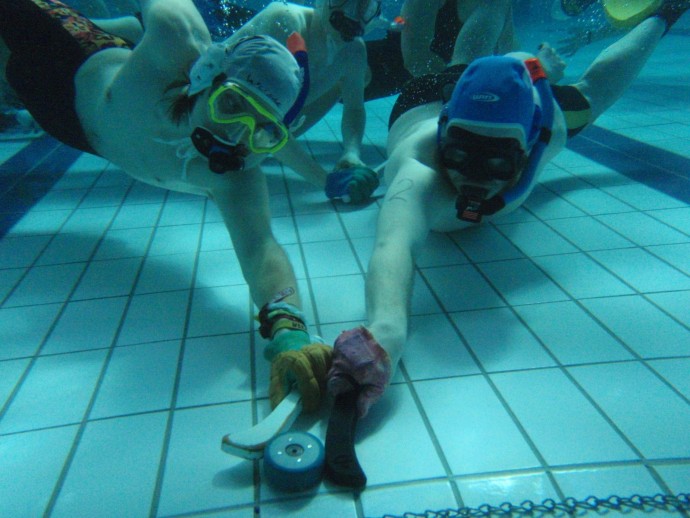 Up and down the country, thousands of people are participating in watersports every day, from cold water swimming to canoeing. However, not all watersports can be found at your local leisure centre. In fact, it’s likely that you won’t have heard of most of the watersports featured on this list, and it would be nearly impossible to find somewhere in your local area offering participation in them. So without further adieu, here are some of the world’s most peculiar watersports.

It’s well known that water can have therapeutic benefits for injured athletes, providing them with a safe form of resistance that they can work against to regain their lost strength and muscle mass. However, actual sports matches conducted underwater are not commonplace at all!

Since the Wembley Empire Pool hosted an underwater boxing match in 1939, this sport hasn’t really caught on. It’s pretty difficult to move your limbs (and throw a punch) rapidly while submerged under water, the impact of the blows is not substantial, taking away the fundamental selling point of traditional boxing. Although Muhammad Ali famously used water in his training routines, I think it’s unlikely that we will see David Haye or Amir Khan challenge their next opponents to an underwater boxing match any time soon!

Zorbing is a sport that involves rolling down a hill while secured in a giant inflatable ball. What could make this sport even more outrageous? Zorbing on the high seas, naturally! Onlookers at the beach may raise their eyebrows when they see what looks like a giant hamster ball roll past them on the waves, but for the participants, it is truly an exhilarating experience. Perfect for the summer months, zorbing on water is an experience that can’t be missed for watersports enthusiasts.

Cold water swimming is a growing sport in the UK, with many clubs throughout the country. To take things a step further, we need to travel further north to Scandinavia, where the water isn’t simply cold, but ice cold. Ice swimming is a popular pastime in Scandinavia, and in addition to its invigorating experience, it is also said to have innumerable health benefits. There is even an annual Winter Swimming World Championships; the 2015 edition of which was held in Murmansk, situated in the bitter north west of Russia. For the truly masochistic watersports fans, there can’t be anything better than ice swimming!

Field hockey is a challenging sport which requires athleticism, hand eye coordination and strategic knowledge. Ice hockey is even more demanding. Underwater hockey, however, is on a whole different level! Try manoeuvring a puck from one side of a pool to another while wearing fins, a snorkel, a swim mask and carrying a hockey stick – clearly this is a sport with a very steep learning curve. Although one of the more popular sports on this list, underwater hockey is not particularly spectator friendly, for obvious reasons!

Wales is famous for its extremely high population of sheep, numerous castles, and Tom Jones. It is not so famous for innovating the wonderfully peculiar sport of bog snorkelling! Every year during August, the World Bog Snorkelling Championships take place in Waen Rhydd peat bog in Llanwrtyd Wells, Wales. Decked out in snorkels and flippers, competitors are tasked with swimming through the thick bog, from one side to another. Due to the density of the water, the swimming is particularly ungraceful, making a hilarious spectacle for onlookers. Prizes are not only awarded for the fastest times, but also for fancy dress. Definitely not an event to miss if you find yourself in Llanwrtyd Wells this summer!