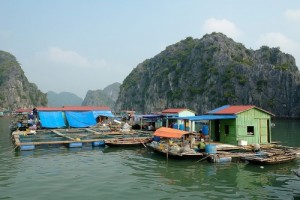 We can’t live without water, but imagine living on water! For the majority of us, a trip to Venice complete with canal ‘streets’ and gondolier taxis, satiates the curiosity of life on water. For the more adventurous among us, though, there are legions of picturesque floating villages and islands so densely populated it’s difficult to tell they aren’t lodged on land.

For an insight into this fascinating way of life, here’s part 1 of the world’s most amazing waterworlds.

Ko Panyi, Thailand – This fishing village built on stilts is home to around 2000 people, all descended from 2 families. Set against the idyllic Phang Nga Province, it is popular with scuba divers and beach lovers. One of the most amazing features of this village is the floating football pitch which was constructed from old fishing rafts and scraps of wood.

Mexcaltitan Nayarit – Also known as Mexico’s Venice, this small manmade island is 1300 feet in diameter and home to more than 800 people. Although not a waterworld all year round, when the rainy season hits, the roads become rivers and boats replace cars.

Lake Nokoué, Benin – From the air, you could be forgiven for thinking that the area had been affected by major floods. On closer inspection, it’s evident that Ganvie is actually a neighbourhood of 3,000 dwellings on stilts, home to a population of 20 to 30,000 people. What’s more astonishing is the evidence that shows this community has resided on this lake since the 17th century. Life is sustained here with fishing and a little help from curious tourists all hankering to try the local mode of transport: the pirogues (canoes).

Santa Cruz del Islote, Colombia – The population of 1,200 of this island seems insignificant, until you realise the island is only 0.0046 square miles. With 90 houses, two shops, one restaurant, a school and no reliable water supply, life in this vastly overpopulated community  amazingly dates back 150 years. The residents of the island are either fishermen or travel 90 mins by boat to the mainland for work.

Loreto Island, Italy – From afar, it’s impossible not to be dazzled by the Neo-Gothic castle built in 1910, which dominates the smallest island on Lake Iseo. Although privately owned, it’s a hot spot for tourist cameras eagerly scouting out the lake’s most famous denizen, George Clooney.

Halong Bay Village, Vietnam – The floating fishing villages set amongst the limestone towers of the bay protect against the regular storms and typhoons by tying the small groups of houses together. The 1,000 residents supplement their fishing income by allowing the tour companies to bring tourists to sample life in their water habitat. Visitors can see the floating school and experience the peace and tranquility of life on the sea.

Uros, Peru – This settlement is unique in that the houses, watchtower, boats and even the island itself are built from dried totora reeds. The islands are anchored by ropes secured to sticks driven into the bottom of the lake, and with the reeds at the bottoms of the islands rotting away quickly, the islands only last about 30 years before replacements are needed.

Migingo, Lake Victoria – This island is home to approximately 100 people, and is currently being fought over by Kenya and Uganda. The half an acre land, consisting of little more than a shanty town, possesses access to lucrative fishing rights within close proximity of the island.

In our next post we shall look at some more of the world’s water habitats, including one which has hit the headlines for all the right reasons. To be continued! 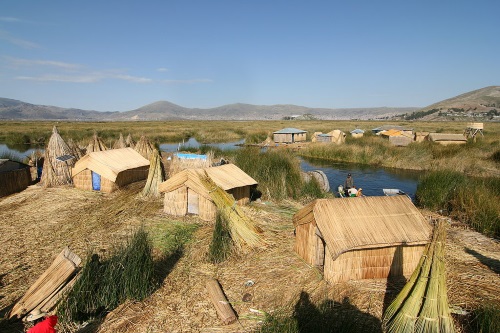