Why do we dream of a white Christmas? 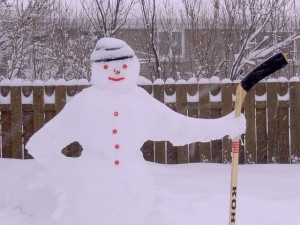 Snow and Christmas are always associated with one another, but why? There was no snow in Jerusalem when the baby Jesus made his appearance in the stable, so just what is behind our yearning for Christmas to be white?

The snow and ice association with Christmas came about partly due to Queen Victoria’s husband, Prince Albert. Hailing from Germany, his childhood was dominated by snow and ice, especially at Christmas time. He not only introduced the first Christmas tree in 1840, he also encouraged the Victorian public to embrace the wintry weather in the festive period.

History reports that we celebrate Christmas on December 25th, due to the Pagan winter solstice festivals. It could, however, have more to do with the mini ice age that Britain was experiencing at the beginning of the Victorian times. Temperatures dropped so low that the Thames froze over and a winter festival was held on the icy surface.

Charles Dicken’s popularised the snowy Christmas with his book, A Christmas Carol, which was written in the era when Britain suffered very heavy snowfall every December. From that point onwards, it became exceedingly popular to produce Christmas cards portraying a snowy scene.

For some of us, building a snowman is the best thing about snowfall. Rolling a huge ball, sticking a smaller ball on top with twigs, buttons and a carrot nose makes the perfect Christmas snowman. Where did this idea begin, and why? Although research shows the concept dates back to medieval times, the earliest illustration of a snowman hails from a book dated 1380, found in the Koninklijke Bibliotheek, in The Hague. Initially there’s little doubt that they were built as a means of warding off evil spirits, but they rapidly became regarded as supreme works of art. Even a 19-year-old Michelangelo was commissioned in 1494 by the ruler of Florence to sculpt a snowman inside his mansion’s courtyard.

Some tips to build the best snowmen:

In addition to building an awesome snowman, here are some fun facts about snow itself:

Finally, it wouldn’t be Christmas without a mention of the most iconic snow song in history: White Christmas by Bing Crosby, which took just 18 minutes to record and has sold over 100  million copies and rising!