The deepest spot on Earth 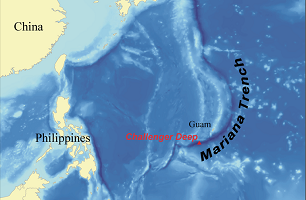 The Mariana Trench is a mysterious ocean trench situated next to the Mariana Islands, near Guam. The very bottom of the trench, Challenger Deep, is the deepest spot in the ocean and scientists estimate it lies approximately 36,000 feet below sea level. To put this into perspective, the average altitude for commercial planes is 35,000 feet and Mount Everest stands at 29,000 feet.

The Mariana Trench was featured heavily in the news in 2012 when it was announced that acclaimed director, James Cameron, descended all the way to the bottom of Challenger Deep in a deep-diving submersible, reputedly to seek inspiration for the sequel to his blockbuster hit Avatar. Although James Cameron’s expedition was widely publicised, this was not the first time explorers have ventured into the dark crevices of Challenger Deep.

In 1960, oceanographer Don Walsh and scientist Jacques Piccard descended into the deepest part of the ocean in a vessel called Bathyscaphe Trieste. Interestingly, Piccard was famous for breaking the world record for the highest altitude balloon flight in 1931, and he applied his knowledge of buoyancy to design a vessel which would be fit for the deep ocean voyage.

The data recorded by James Cameron’s vessel after descending into Challenger Deep is extremely insightful, particularly in regards to the marine life which dwells close to the ocean floor. It was discovered that there is an abundance of amphipods dwelling in the Challenger Deep, which is not unusual as these crustaceans are to be found widely throughout Earth’s oceans.

What is unusual, however, is their size. The largest amphipod brought back by the vessel measured 17 cm, but there were amphipods of the size of 30 cm which could not be captured – significantly larger than the amphipods which you would find closer to sea level.

Another prominent species dwelling on the floor of Challenger Deep is the sea cucumber; longbodied endocrines with a leathery skin and well camouflaged against the floor of the ocean. Interestingly, all the sea cucumbers were completely still and pointing in the same direction, presumably for the purpose of receiving nutrients from the ocean currents which pass through the bottom of the ocean.

In addition to larger marine animals, scientists have also identified over 200 different microorganisms in the mud collected in Challenger Deep.

The formation of the Mariana Trench

One of the primary reasons why the Mariana Trench is so deep is due to a geological process called subduction. This occurs when one part of the seabed (the Pacific crust) is forced beneath another (the Philippine plate). This process causes seismic and volcanic activity in the overriding plate and a downward flexure forms a trough at the point of contact, in this case the Mariana Trench. Isn’t science wonderful? We eagerly await to see how much of James Cameron’s descent into Challenger Deep has permeated the scriptwriting and CGI of Avatar 2 when it is released next year!