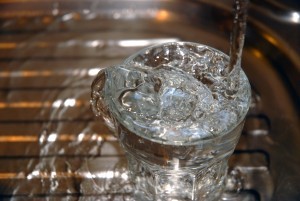 An RO system is the only really effective way of removing all of the dissolved impurities from mains or softened water.  It is also the only way of removing very specific elements such as sodium or fluoride.

A reverse osmosis (RO) system works by forcing water through a semipermeable membrane, which has small enough pores to allow the water molecules through but prevents the dissolved minerals passing, thereby producing a stream of pure water.  As the dissolved minerals build up on the “dirty” side of the membrane, these need to be flushed away so an amount of water is continually passed to drain during filtration to ensure the membrane stays clean.

The overall efficiency of the RO system has a large bearing on the amounts of rejected water to drain. Most standard RO system (such as the EMWC,  Puricom or Clearstream RO) flush away around 7 to 8 litres of water for every litre of water produced as pure water. More efficient systems such as the Kinetico K5 (or KRO+ previously) drain away less water (typically 2.7 litres per litre of pure water produced).

While these figures sound alarming, it must be remembered that only the drinking water is being treated and so the overall volumes of water involved are low. Typically for a family of 4 in the UK, the amount of water flushed to drain would equate to around an additional £20 to £25 per year in water. Not much when you compare this to the price of bottled water, is it?

The simple answer to this one is “yes”. However, simply saying RO water is acidic is a massive oversimplification. All water contains carbon dioxide – a naturally occurring acidic gas. In areas where the water is naturally soft and doesn’t contain much else in the way of dissolved impurities, this water too tends to be mildly acidic. In areas where the water is harder, such as the South East, the carbon dioxide has been neutralised by the dissolving of local chalk to produce hard water. Crucially though, the carbon dioxide is still present, just bound up as bicarbonate or alkalinity.

This level of acidity will be far less than that present in the stomach even and will disappear when the water is boiled for tea and coffee, but it can be neutralized by the use of a re-mineralisation cartridge, such as a K5 Mineral + cartridge from Kinetico.

There may be some truth in this if you live in the USA and have well or borehole water as your supply, which contains very specific contaminants. If you are in the UK however and have a standard mains feed to the house then the number of stages simply becomes a neat piece of marketing and is broadly irrelevant!

The “stages” refer to the number of filters used in the system, only one of which is the RO membrane, which does 99% of the work to purify the water, and one is the post filter which filters the water as it runs from the storage tank to the tap. The rest are simply there to clean up the water of any sediment and remove the chlorine from the mains water as this can affect the efficiency of the membrane. UK mains water is clean and generally free from sediment and the chlorine – it makes up only between 1/100th and 1/700th of what is in the water. To spend money on extra “stages” when this tiny amount can be removed by one pre-filter only would seem counter intuitive. Better to use less stages and spend the same amount on a system which manages the water through the membrane better as this does almost all of the work of the filter system. This will prolong membrane life and lead to a more efficient system, and ultimately better water.

RO removes all the good minerals from the water

Again this is true, although if you look at the figures of what is present in water in terms of calcium and magnesium, then it quickly becomes clear that most people get their nutrients from food rather than water.

Nevertheless, the use of a Kinetico K5 Pure+ RO System will ensure that the calcium and magnesium are present in the water that you drink. Remineralisation cartridge upgrades are also available for other RO systems. If you’re considering purchasing a RO system or would simply like to know more, please don’t hesitate to contact Total Soft Water for some free advice.