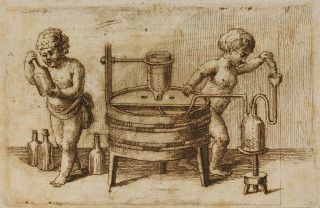 On our planet there are over 300 million trillion gallons of water, so it is rather strange to consider that people in certain regions need more. However, when we consider that 98% of  Earth’s water is oceanic and 1.5% is frozen in our ice caps and glaciers, less than 0.5% is actually drinkable. With these figures in mind, the need for more water becomes understandable.

The acuteness of this problem is compounded when we factor in the growth of the human population and the depletion of underground water tables to the point where countries formally declare their need for water.

In ancient times, and certainly around the semi-arid regions of Greece and Rome, without a sophisticated system to bring water to the people, necessity provided the impetus for inspiration.

Can we purify water?

Yes is the short answer, and this has been practiced since the ancient times. Surprisingly, this wasn’t an invention of the Romans; this honour was bestowed upon the Greeks, namely Hippocrates, often described as ‘the father of medicine’. He boiled water then passed it through fabric material to remove sediments. This later became known as the Hippocratic Sleeve.

This was not the earliest attempt at purification, for Hippocrates actually based his experiments on techniques which were centuries-old. Hot metal plunged into water and crude filtration systems made of either sand or charcoal were already in existence.

Aristotle was also on the case; he performed experiments at sea that involved immersing hollow wax balls into the salt water for a full day and night.The wax shell filtered the water, leaving a salt residue on the skin. Aristotle claimed that the water would be potable as the salty and earthy residues would be sieved off.

Aristotle also made note that if seawater was boiled then its ‘sweet vapours’ were entirely drinkable. This in itself is not remarkable; desalination is a natural process after all. The heat from the sun causes the sea vapours to rise and form clouds; the subsequent rainfall becomes our salvation as drinking water.

Pliny the Elder’s sparse writing on the subject noted Aristotle’s wax experiments and furthermore discussed how balls of fleece, when immersed in water and then squeezed out, would offer a supply of drinking water.

Did these practices work?

To a greater or lesser extent, yes. Although it should be stated that the Hippocratic Sleeve seemed more effective at reducing unseemly smells from the water than purifying it completely.

It may not have been the most common practice, but the act of boiling seawater was commented on prolifically, and condensation of drinking water on both fleeces and sponges from seawater was a familiar occurrence.

Perhaps the most noted, and relatively contemporary, practitioner of desalination was James Cook in his circumnavigation of the world. Without these practices it could be argued, probably unsuccessfully, that we would all be members of The Flat Earth Society!