Are there drugs in our water supply? 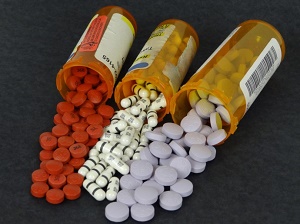 Think about this: medicines are specifically designed not to be broken down. They act as slow release agents to aid whatever is the ailment over a protracted period of time. If an animal is given drugs then there are going to be residues left in any meat sold in the supermarkets. According to The Global Healing Centre, 38% of cow’s milk in the USA is infected by a cocktail of up to 81 drugs; penicillin included. It is argued that this is one of the core reasons for the growing amount of people who experience allergies to dairy products.

The same principle applies to water. Millions of pounds are spent on prescription drugs every year. After ingestion, they’re eventually expelled from the body and flushed away. Due to the slow release agents in the drugs, an unavoidable residue remains in the water. Another common practice which exacerbates this problem is the disposal of unwanted drugs by flushing them away.

What type of drugs are we talking about?

Why don’t water treatment plants deal with this problem?

The answer is that water treatment plants cannot operate at 100% efficiency. Cancer drugs are of a particular concern because they dissolve easily in water, are hard to break down through traditional purification methods and can remain potent in low doses for long periods of time.

Cytotoxic drugs used in chemotherapy are not screened at purification plants in the UK, and whilst the traces are minimal (300 to 30,000 lower than recommended safety levels), there is some concern that there could be an adverse effect on the elderly as their immunity systems are weakened and young children who have yet to develop their detoxification systems. Whilst the concentrations are very low, another consideration is that repeated ingestion and retention of these drugs could be problematic in the long-term.

Is this just a modern myth? Is our water really going to harm us?

As mentioned, the current risk according to most learned observers is that we are perfectly safe. The levels are so low that the risk is negligible. However a report from The World Health Organisation (WHO) states that despite these reassurances, there are ‘knowledge gaps’ in our understanding of the potential dangers of long-term exposure to low levels of drug intake and the combined mixture of pharmaceuticals.

Is anything being done about this?

WHO feels that these knowledge gaps should be filled and has requested further investigations to clarify any future short or long-term health risks to humans, animals and plantlife. Until then, we need to keep our own counsel about the water supply and make our own safety provisions such as integrating filtered water into our daily lives.