The wonders of washing machine sludge 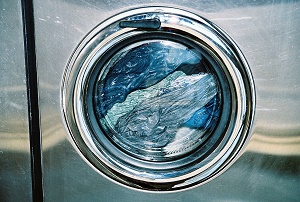 So what is this dreadful awfulness?

“Yuck. My washing machine has grey slime between the grey rubber door seal and the metal drum – does yours?”

“Sick of this problem. Every so often the washing cycle finishes and nearly every item has this dirty brown sludge type stuff on it.”

Complaints such as these proliferate on internet forums. Talks of grey and white sludge, scum on the baths and taps, pipes getting clogged, blocked drains and shower heads are commonplace.

Where does it come from?

The UK has either hard water or soft water and it is fundamentally your geographical location that dictates what kind of water you will be supplied to your home. In the south, east and central areas of the country, the land rests on limestone and chalk escarpments unlike the north, which is predominantly a granite composition.

In the limestone and chalk areas, as rainwater permeates the soil and collects in the underground water tables, it dissolves calcium and magnesium, a dash of potassium and a smidgen of sodium en route, all of which joyfully intermingle. The problem is that these constituents contain positively charged ions which help to prevent the dissolution of elements within the water that are designed to dissolve. Soap and detergents are prime examples of this.

The high percentage of positively charged ions, evidenced by the presence of calcium and magnesium, is why some water is called ‘hard’. This hard water prevents the soap and detergents from dissolving and leads to a build-up of limescale, blocked pipes, scum on the baths and sinks and and also reduces the efficiency of your heating system.

By association, it is also guilty of creating your washing machine sludge. Repeated washes using washing agents that simply do not dissolve leads to the inevitable build-up of sludge coupled with a truly unpleasant smell which emanates from newly washed clothes.

How can we combat this problem?

There are many products on the market designed to reduce limescale. People also recommend using vinegar and lemon juice boiled in the kettle to reduce this problem. Additionally, flushing your washing machine with a very hot wash can be beneficial; the popular low temperature washes have an adverse effect on sludge, exacerbating the problem by reducing the soap’s effectiveness. Hot washes can significantly reduce the amount of sludge if done frequently.

However, it is definitely worth considering installing a water softener, principally because it is designed specifically to remove the minerals that make hard water so hard. Once the positive ions of calcium, magnesium and iron are removed, then the dissolving process becomes immediately more effective.

By installing a water softener, your water and heating bills can be reduced by up to 15%, there will be less scum and limescale, less clogging of the pipes and less money spent on detergent. But back to the topic at hand – it will significantly reduce the issues with washing machine sludge and will extend the lifetime of your washing machine.