What is so ‘hard’ about hard water? 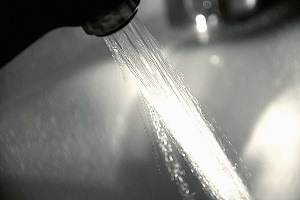 Simply put, hard water is ‘hard’ because it contains more minerals than soft water. As rainwater falls through chalk and limestone rocks, it absorbs calcium and magnesium. 60% of all UK households have hard water, with Eastern, Central and Southern England being particularly notorious for having very hard water.

The harder the water, the more likely it is that it will contain a greater density of dissolved minerals, in particular calcium and magnesium. These minerals have positively charged ions. These electrically charged ions mean that other positively charged ions will not dissolve as readily in the water. It is the reason that soap, for example, does not dissolve easily in hard water. Other issues include a build up of limescale, or even more visibly apparent would be scum build up around the sides of the bath.

What can be done about this?

A water softener reverses the ion charges prevalent in hard water. The process is deceptively simple; the water softener unit is packed with resin beads which are negatively charged. So, as the hard water passes through the resin beads, the positive ions are removed leaving the soft water. It’s a trade-in effect: the calcium and magnesium are replaced, mainly by sodium, which itself has positive ions – just not as powerful as the main culprits.

Periodically, a brine solution within the system then flushes the calcium and magnesium residues from the resin beads. This is where the salt comes in. Water softeners have a brine solution produced by the addition of salt.

So, what salt should be used in water softeners?

Salt for water softeners is produced from refined food grade salt. As it is in abundant supply, the environmental impact of this is minimal. There are three main types – tablet, block and granular. It is important to use the salt type recommended by the manufacturer in order for your water softener to function optimally.

Can I use this salt for cooking?

In short, no. Whilst it is perfectly safe to use in the water supply, the finished product does not meet the required standards for cooking. Likewise, you cannot use table salt as an alternative in your water softener treatment – it is simply too refined to do the job properly.

Does it have any other uses?

Absolutely. If there is a heavy snow and you need to clear a path, water softener salt can be used very effectively as a melting agent. However, due to its cost – it is more refined than rock salt – it is not something to be encouraged. Rather, it should only be used in emergencies

With all these positive ions, does hard water make you sick?

No, otherwise all of us who live in hard water areas would be clogging up the NHS! However, if  you are on a strict sodium-light diet, it may be worth installing a separate water unit to bypass the water softener, or even using potassium chloride as an alternative to salt. However, always check the costs before you do this!

Pingback: Limescale, the low down… | The Organised Cleaner