What’s so great about Lake Baikal? 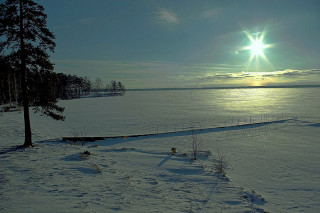 As a preamble to this article, it’s important to mention the Great Lakes: that vast tract of interconnected fresh water lakes located in north-eastern North America. Lakes Erie, Michigan, Huron, Ontario and Superior actually contain 21% of the total surface fresh water on the planet, or 84% of the total surface fresh water for the whole North American land mass. All very impressive, and quite staggering when you contemplate how much of the world’s most important resource is locked away in such a relatively small area. This information helps to underline the significance of Siberia’s Lake Baikal.

Situated in the Buryat Autonomous Republic and Region of Irkutsk, Lake Baikal was created by the shifting of tectonic plates about 25 million years ago, making it the oldest lake on the planet. In terms of surface area it comes in at a respectable 7th in the league of world lakes but there is a reason it is called ‘The Russian Pearl’. The lake contains the purest fresh water of any lake in the world, it is also the clearest-it is so transparent that you can see down to a depth of 40 metres.

It is also the deepest lake in the world – Geology.com describes it as being 5314 feet or 1,637 metres deep. The world’s deepest fresh water submarine dive, 1,637 metres, was recorded here in the 1990s. It is surrounded by mountains and unusually for a land bound lake it has not silted up, as they are prone to do. The principle reason for this is that the lake is fed by some 350 rivers, completely replenishing itself approximately every 400 years. Despite the number of rivers entering the lake, only one leaves – the Angara River.

The big fact about Lake Baikal

In terms of pure volume, Lake Baikal is the largest in the world. There is some dispute that collectively the Great Lakes, in their entirety, hold more water, but the current measurements maintain that this lake holds at least 20% of the total surface fresh water in the world. Furthermore, due to the constant shifting of the tectonic plates on which the lake nestles, the volume is increasing every year. In fact, the current school of thought is that as the plates continue to split, the lake is destined to become an ocean. Come back in an aeon or so and Lake Baikal will be the undisputed king of volume!

It is rumoured that Genghis Khan was born here on one of the islands, and that Jesus Christ (for some reason) blessed the lands to the north and cursed the lands to the south. To this day the locals say that no corn will grow on the cursed land.  Lake Baikal is on the World Heritage of UNESCO listings and despite recent concerns about pollution in the lake, President Putin has given his assurance that the integrity of the lake will be protected. So that’s all right, then.