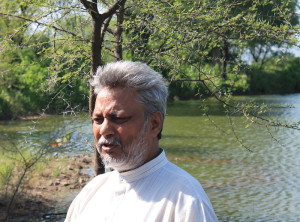 In the semi-arid regions of India bordering on the desert, there are areas known as dark zones. These large tracts of land, which once were arable, became desiccated through drought, mainly caused by overfarming which in turn reduced or completely ravaged the ground water levels. The villages in and around the surrounding areas of these dry zones could no longer grow crops, and without food and water, many decided to migrate to the cities to find work to feed their families.

The first time Rajendra Singh came to public attention was in the Anwar district. By utilising ancient methods of water retention, in particular the johad and check dam methods, he managed to replenish all the water in the region within fifteen years. The johads are semi-circular barriers built on slopes to retain monsoon run-offs, basically collecting pools of water, whereas check dams are small barriers built across water flows of small streams and rivers. Check dams are of a low level construction so once the dam has collected a sufficient pool of water the stream or river can overflow and continue on its way without detriment to farmers further downstream.

The bringer of life

Rajendra’s background was illuminating; the two main influences in his early teenage years were The Gandhi Peace Foundation, who imbued in him a desire to help people, and a Pratap Singh (no relation), his English teacher in school who gave him a profound understanding of how governments work, what they will do for the population, and even more importantly, what they won’t do. Caring for others and teaching self-sufficiency became the cornerstones of his life’s philosophy. He initially began training in medicine, but was told that the impoverished villages needed water more than they needed medicine.

He put his altruistic philosophy to work in the Anwar region and in others, and by educating the farmers in the area they quickly learned the benefits of helping one another. Crucially, the materials used were all natural resources which were available in abundance; the johads and check dams could be made out of mud, stone and wood.

Thousands of these dams were built, including 5,000 johads in the Anwar region alone. Finally, the land came back to life and the water could be used both for crops and watering cattle. The most remarkable facet of Singh’s endeavours was that there was a natural seepage back into the land and the ground level water returned. As a result of this, in these semi-arid lands the rivers began to flow again.

In 2015 Rajendra Singh, ’the bearded man of check dams’, also known as ‘elder brother’ and ‘the waterman of India’, won The Stockholm Water Prize which is universally acknowledged as the Nobel Prize for water. He brought water to over a thousand villages, and made rivers flow again. He is now turning his attention to the Ganga River Basin, India’s holiest river and home to 500 million people, taking the government to task for the mismanagement of this essential water resource. 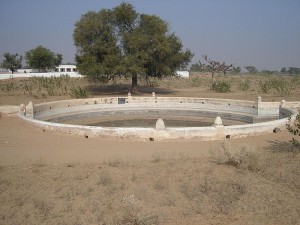