Is there freshwater in the oceans? 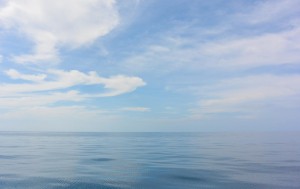 There are vast areas of low salinity, but can you drink the water? Again, no. The Aral and Caspian seas contain freshwater, as do the Great Lakes, which due to their immense size should perhaps be called inland seas. A recent blog post about Lake Baikal would certainly put it in a seaworthy category due to the large volume of water. However, the body of water is landlocked. Most observers argue this negates the ‘sea’ status.

The huge discharge of freshwater from the larger rivers into the oceans,in particular the Amazon and Orinoco, means that there is clear evidence of freshwater hundreds of miles out to sea, but eventually the freshwater still merges with its saline cousin. Extracting drinking water from this body of water would not be an easy process. However, the water could be pumped from these rivers further inland without fear of contamination.

With this in mind, there have been some recent developments which could lead to massive implications for drought-threatened lands.

What is the recent discovery?

While searching for oil and gas, scientists came across huge natural aquifers at the end of 2013. These are basically large areas of water permeable rock through which water has seeped, forming pockets of fresh or brackish water. Australian scientists say they have uncovered vast pockets of freshwater reserves under the continental shelves of Australia, China, North America and South America.

According to Dr Vincent Post and his team of researchers from Australia’s National Centre for Groundwater Research and Training at Flinders University, anything up to 500,000 cubic km of water is contained in these enormous aquifers across the world.

These reserves were formed when ocean levels were lower and rain water seeped into the ground to form below-surface aquifers. As the glaciers melted, so the ocean levels rose. This covered the aquifiers until today.

To put things into perspective, this amount of water is 20 times greater than that contained in the great lakes – themselves responsible for 20% of all the ground surface freshwater in the world.

Dr. Vincent Post underlined the importance of this discovery by saying that the newfound freshwater reserves are 100 times greater than the amount extracted from below the earth’s surface since 1900.

How important are freshwater sources?

How do we get at it?

There are established procedures for accessing aquifers; some overflow naturally onto the land as water levels rise during heavy storms, others can be accessed by surface wells, with care being taken to seal the wells to avoid contamination. For the more inaccessible underground lakes, some pumps can stretch for over 1000 feet.

However, there is no doubt that extracting the freshwater from below the ocean surfaces has complications; the main one being contamination through breaches into the aquifer by seawater. Nonetheless, despite it being a costly procedure, it is still more economically attractive than direct desalination of seawater. With these new discoveries of freshwater, there is hope for us all yet.