Waterfalls: It’s the volume that counts! 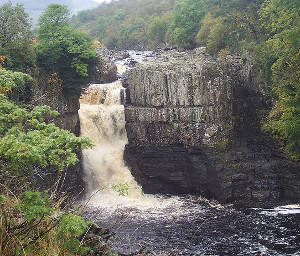 Having discussed the world’s widest and highest waterfalls in two previous blog posts, we come to the final part of the trinity – volume. Now, there is no denying the beauty of say, the Angel Falls, but for some it’s all about power. The sheer dizzying volume of some of these waterfalls is a true reflection of the forces of nature.

First, it is worth reflecting on our own examples, in order to appreciate the true majesty of the main contenders. Just take one example: the aptly named High Force lying on the the River Tees and, in the words of many tourist sites, ‘well worth a visit’. The word ‘force’ is taken from Viking origins, meaning, unusually, ‘waterfall’.

This time around we will just announce the winner(s).

The Inga Falls, at 11 million gallons of water per second. Strewth. But hang on a minute, a definition of a waterfall is that it should have a vertical drop. The very nature of the Inga Falls means that it has no vertical drop and as such some experts refuse to recognise it as a waterfall, seeing it instead as a series of rapids. Therefore, Inga Falls must be stripped of its title.

Our old favourite, Chutes du Khone, along the Mekon river. Already holding the title of the world’s widest waterfall, it pounds out 2.5 million gallons of water every second and has a 45 feet vertical drop in places; so that’s all right then! Whilst it is the widest when visible, the monsoon weather actually conceals much of the waterfall throughout the year thus negating the volume.

Before we come to the No 1 waterfall by volume, maybe it’s worth giving a special mention to the Guira Falls, considered by some to be the main contender for champ (you can see a youtube clip of it here). But the crown was ripped from its grasp by the Itaipa dam, built for some serious hydro-electric power. The dam acted as a shield for the natural flow of the waterfall and all its aspirations came to grief. Dam. Dam. Damn.

Wagenia Chutes, on the Lualuba river, could have been the name on everybody’s lips. The World Waterfall Database says it is not visually significant particularly because ‘the falls all but submerge themselves during the wet season’. The precedent has been established (as in the case with Chutes du Khone above) so Wagenia is immediately disqualified. We can all breathe a sigh of relief.

Hopefully, we can come up with something more spectacular and rewarding.

By popular consent, the people’s champion

We finally have our winner, having knocked out 10 waterfalls because they were either:

Formed of three waterfalls, although flowing from the same river and into the same bowl, this most famous waterfall attracts two million visitors a year and has a flow rate of 2,407 metres per second. Niagra Falls, also known as the Onguihaari (the falls’ Iriquois name), means ‘the strait’. This waterfalls drains water from Lake Erie into Lake Ontario. Folk have gone over it in a barrel and walked across it on tightrope. The last to do this, in 2012, Nik Wallenda, had to produce his passport when he arrived on the Canadian side, which is pretty funny when you think about it.

Ladies and gentlemen, The Niagara Falls!