When a water table falls 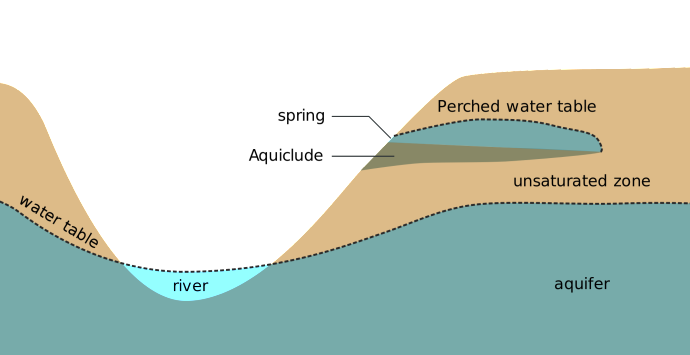 So, what is a water table?

When an area becomes completely saturated with water, the soil and the rocks are completely filled with water and cannot absorb any more – this is known as the phreatic zone. The area above this zone is the unsaturated zone, where the rocks and soil have accumulated some water, but there is room for more.

The area between these two zones is where the water accumulates to form the water table. It can rise and fall depending on a number of factors.

Factors determining the level of the water table

Water seeping down from the surface from rivers, lakes, rainwater and snow can all affect the water table. This saturation can only occur if the rocks are porous however. Chalk escarpments provide a good example; while granite generally prevents water seepages, seismic shifts can occur which fractures the rocks and allows the water to access lower levels.

Why is the water table important?

It is estimated that there is 20 times more water below the surface than on land. If it is accessible then it can sustain life in densely populated areas and also in desert or semi-arid regions.

Water pumped up from the water tables can be used for big industry and agriculture, however, it is important that we use it at a sensible rate to avoid depletion.

Where is depletion occurring?

Everywhere is the short answer. Saudi Arabia, for example, is a country that has long understood the importance of water. “Water is as precious as gold”, said Mohamed Hany al-Dabbagh, Vice President of Saudi Arabian Mining Company.

The high intensity water usage by Saudi Arabia’s mining and industry has resulted in a depletion of the country’s age-old fossil water supply. The knock-on effect of this is that Saudi Arabia has had to cut back on its mining projects as well as wheat production.

In North West America, the mighty Ogallala water table is the most important source of water for irrigation, industry, hygiene and drinking. Unfortunately, depletion has become so severe that farming will reach peak usage by 2040.

Since the Ogallala supplies one fifth of all water for big industry, crops and cattle, the issue is plain to see. The Ogallala must be preserved, and in turn lessons must be learned in order for other countries to preserve their own water tables.

The Washington Post states that in order to replenish the water table, the midwestern farmers would have to reduce their usage by 80% which simply isn’t going to happen!

However, if it were possible to reduce the usage by 20%, the drainage of the water table could be slowed by another thirty years and more efficient farming methods could be implemented during this period to stave off absolute depletion and reverse the trend.

If we fail to do this, the alternative is rather scary. If the Ogallala water table is allowed to deplete it would take 6000 years to replenish! If we consider this in the context of other water tables which are at risk of depletion, it is clear that a concerted effort needs to take place to avoid this future catastrophe from happening.