Origins of the Roman baths 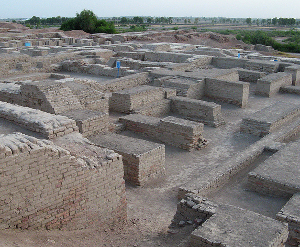 So, did the Romans invent the baths? Following our revelation about aqueducts being invented not by the Romans but by the Minoan civilisation, another myth shattering disclosure is that the Romans did not invent the baths. Putting ‘Roman’ in front of the word does not make it their invention!

OK, so who did invent the baths?

The earliest known baths actually came from the Indus Valley civilisation. This civilisation, also known as the Sindhu-Sarasvati civilisation, inhabited a land area slightly bigger than Pakistan and approximately four times the size of Britain.

They had two major cities of 80,000 inhabitants each, known as Mohenjo-Daro and Harrappa. At Mohenjo-Daro there has been significant evidence which suggests that there may have been a public bath, consisting of a large water tank. The walls were lined with bitumen to prevent seepages and there were two staircases leading into it. This was dated at 3000 BCE, pre-dating the Romans by some 1,500 years.

Additionally, excavations have shown that the people of Mohenjo-Daro were not only aware of sanitation but had a working knowledge of it; their homes were connected to a system so that waste water would flow into covered drains.

The Romans weren’t even the second civilisation to implement baths; the Greeks built public baths initially like our swimming pools, but filled them with cold water for those early morning dips after a workout at an adjoining gym.

Homer often made reference to bathing in The Iliad, where Odysseus, shipwrecked on Phaeacia, is rescued and offered succour by Princess Nausicaa – an unfortunate name perhaps. However, she gives him some bathing condiments and, after bathing, he experiences a ‘divine transformation’. He becomes bigger, stronger, faster – and with great hair too. We seem to have lost this particular skill of bathing as the cenuturies have passed.

The bathing pools eventually became bathtubs, favoured by the rich who fancied a bit of privacy. These were not crude affairs. Again, excavations show that the bathroom was a rather sophisticated affair, with not only bathtubs but also wash basins and foot baths. Examples of these baths can be found at Knossos, Crete, dating back to the second century BCE and there are some magnificent alabaster bathtubs from Akrotiri, Santorini.

The Greeks also invented a form of shower. Initially, water spouts on fountains within the gymnasium or arena would act as crude showers, but there is much pictorial evidence of more sophisticated shower rooms where athletes would cool down by standing under shower heads in the shape of boars or lions. Rather than a servant tipping water into the shower receptacles, the water was piped to the shower heads which in turn would spray over the bodies.

The most popular cleaning method in Greece was to rub oneself with olive oil and then scrub it off with a tool called a strigil prior to bathing or showering. The Egyptians favoured a concoction of animal and vegetable oils with alkaline salts to form a soap-like material.

What the Romans did is another story. Still, at least they invented the toilet – didn’t they? 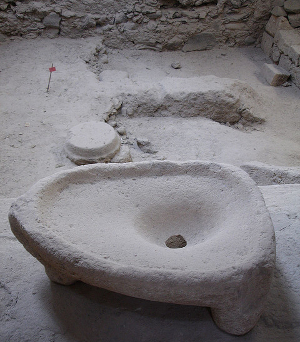 (Photos by Comrogues and Tom Wallace)