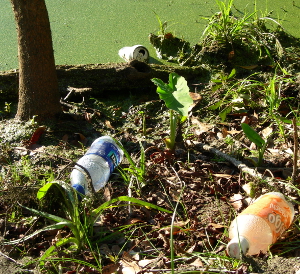 Plastic pollution presents one of the most severe threats to the earth’s environment, particularly to the oceans. Unfortunately, the throw-away culture that we live in shows no signs of going away. And the fact that we use non-biodegradable material such as plastic to manufacture drinking bottles, shopping bags and other consumable products spells disaster for the environment for years to come. Several decades ago, bottled water was marketed as a luxury item, but since the 1990s the bottled water industry has experienced exponential growth. Thanks to the marketing prowess of big corporations, in the UK alone the bottled water industry is worth approximately £2 billion per year.

Before we even touch on the direct environmental impact of plastic pollution, the wasteful manufacturing processes used to create plastic water bottles must be noted. Some sources estimate that if you were to fill a quarter of plastic water bottle with oil, that would represent the amount of oil used in the production process – staggering! Due to the production processes, it takes approximately three times the amount of water to manufacture a bottle of water as it does to fill it. The costs for transporting bottled water, both for sale and for disposing of the packaging after use, also represent a huge toll on the environment in terms of energy costs.

While discarded PET (the thermoplastic polymer resin used to manufacture drinks containers) can be transformed into other products, this does not mean it is truly recyclable, because at one point or another the product is still going to end up in a landfill site where it does its most harm. In addition to this, the vast majority of PET containers are not even correctly disposed of in the recycling bin and are instead chucked away with other household rubbish to accumulate in landfills.

Impact on animal and marine life

PETs containers do not biodegrade, they photodegrade, which in reality means that it can take between 500 to 1000 years for them to fully decompose! As they break down into smaller particles they become ingested by the wildlife and thus work their way up the food chain. Over 80% of plastic pollution in the ocean originated from the land, in the form of: street litter being blown into the ocean, inadequate refuse receptacles, transportation accidents and illegal dumping. Plastic constitutes approximately 90% of all rubbish floating on the ocean’s surface!

When an animal accidentally ingests plastic, sharp corners can puncture their bodies, as well as cause them to die from starvation since the plastic parts cannot be digested and thus remain in the body. For instance, the survival of the albatross as a species has been threatened solely due to plastic pollution. Animals can also become entangled in plastic debris which can result in suffocation and death. Research also indicates that plastic can mimic oestrogen and produce hormonal changes in microscopic organisms, resulting in mutations. While the impact of ingesting plastic particles, either directly or indirectly, on human health is not definitively known, there may be a multitude of associated illnesses.

If we are to reverse the impact of plastic pollution on the environment, the solution must come from the consumer. If plastic pollution is not something you are prepared to contribute to, why not lead by example and make the change to drinking filtered tap water instead? There are plenty benefits to do so.

Pingback: Fukushima & the death of sea creatures along the west coast of North America |