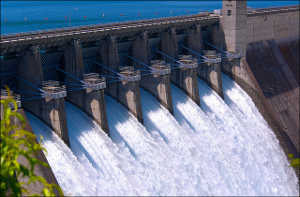 Hydro-power is electrical power generated from the motion of water, whether flowing or falling. There is a potential energy signature for all bodies of water that flow downhill; hydro-power can harness this potential energy and transform it into kinetic energy by use of a turbine. The greater the body of water and the higher its gravitational force, the more kinetic energy that can be harvested by an efficient hydro-system. For this reason, falling water has more value than flowing water in terms of the amount of energy that can be harvested.

Hydro-power is the world’s leading renewable energy source, producing 3 288 TWh (16% of global electricity generation) in 2008. Currently, 150 countries utilise hydro-power, with the Asia-Pacific region, China in particular, being at the forefront.

The concept of harnessing water’s energy to power human technology has been around for thousands of years. The earliest historical records of hydro-power were in ancient Greece, where water wheels were used to grind wheat into flour. However, the true advent of modern day hydro-electricity was arguably in 1882, when the first hydroelectric power plant started operating on the Fox River in Appleton, Wisconsin, USA. This operation was a huge success – before the end of the 1880’s there were 200 hydroelectric power plants in the USA alone!

In a world where natural energy resources are quickly diminishing, hydro-electricity offers numerous advantages. Hydro-electricity is a very clean source of energy, with no pollutants produced by the power plants to damage earth’s atmosphere and environment. Also, provided the body of water doesn’t run dry, hydro-electricity can be generated indefinitely, making it a consistently reliable energy source. Dams are constructed to a very high standard, meaning they will last for decades, ensuring that the water is safely conserved until it’s ready to be used. Also, Dams often become a tourist attraction and pleasant recreational location for local communities. It’s also suggested that as technological advances are made in the future, hydro-power will create vast amounts of new jobs.

However, there are some drawbacks too. Dams are incredibly expensive to construct due to the stringently high building requirements. This cost means that the dam must operate for an extended period of time so that profits can be generated. There are also numerous environmental impacts caused by dams. For instance, the construction of the Hoover Dam allegedly caused multiple earth quakes in the surrounding area. Some have theorised that the recent earthquake in China was caused by the filling of the Three Gorges Dam reservoir, which is currently the largest hydroelectric power plant in the world. Dams can also cause a change in the natural water table and cause flooding which can damage the environment and destroy wildlife.

Many of the hydro-electric power plants built over half a century ago are still in operation today. While constructing a power plant is a lengthy and expensive process, the energy source is free and always will be! With snow and rainfall constantly replenishing the earth’s water supply, this is an energy source that is effectively inexhaustible and can be used for centuries to come. With constant technical innovations being made in order to make hydro-electric power plants more efficient at generating greater amounts of energy, hopefully we will be able to power our 21st century lifestyles without continuing to deplete the earth’s natural resources at such an alarming rate. For the individual, the change starts with our domestic use of water.